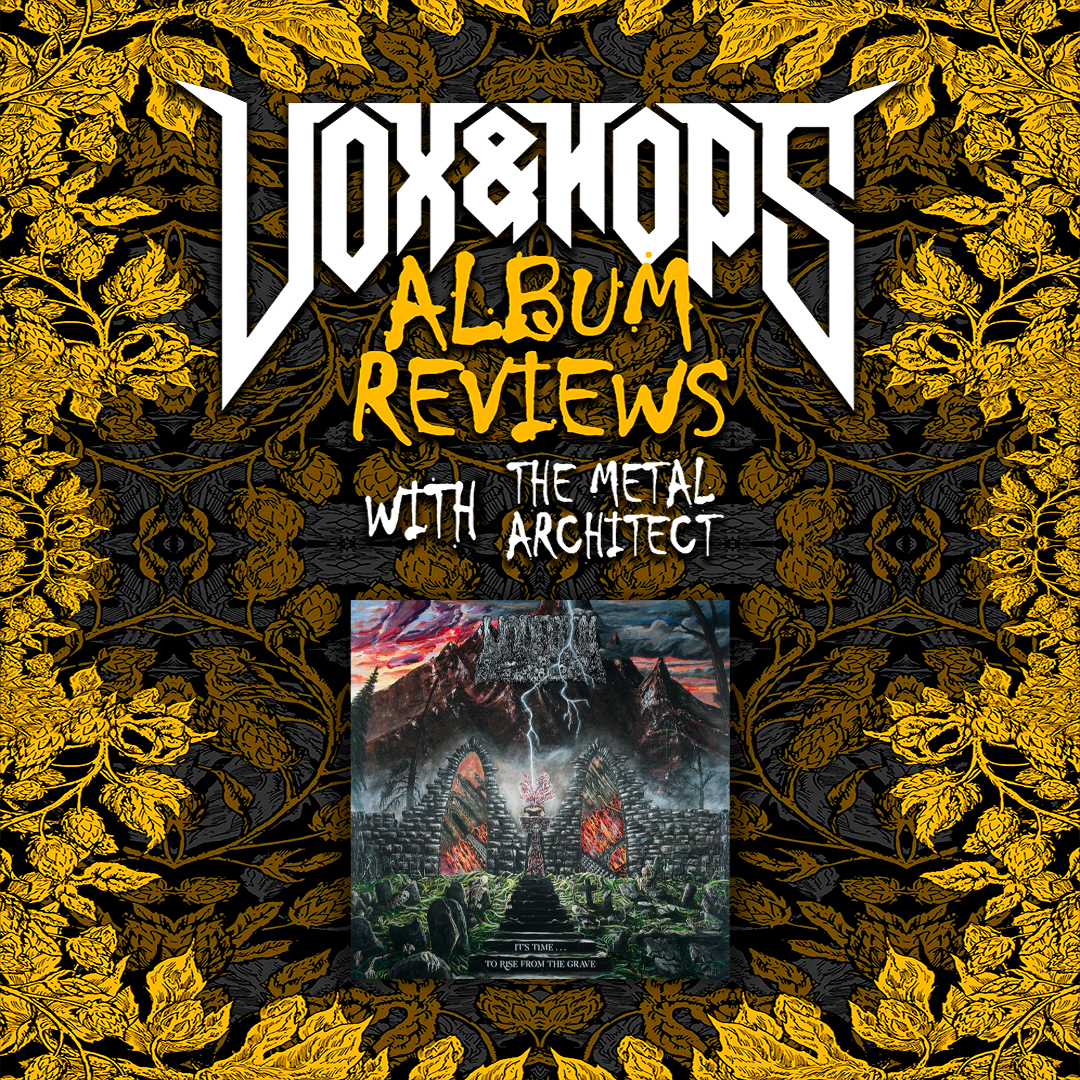 Back in October 2020, which seems like 5 years ago, an absolute mammoth record dropped that grabbed the attention of death metal fans young and old. That album was Lesions of a Different Kind from a young up and coming band called Undeath. These guys had been burning up the underground with their two demoes and Lesions brought them to the forefront of the scene. I personally got to see them rip up the stage with The Black Dahlia Murder in 2021 and they impressed the absolute hell out of me and the sold out crowd. Enough with the old, let us discuss the new album, It’s Time…to Rise from the Grave, that drops on April 22 via Prosthetic Records. Opening up the album is a little bass strumming before launching right into bludgeoning on “Fiend for Corpses”. Full of groovy, head banging riffs, the track drags you along (in a good way) until they up the tempo a bit and bring in an absolutely killer solo to show off their musical chops. Next track up is “Defiled Again” and it is a pretty accurate title for it. Wasting no time again, the boys launch back into their signature sound and pulverize the listener into minced meat with those groovy riffs and excellent drumming. Lead single “Rise from the Grave” starts off a big thrash vibe with a much faster paced riff throughout the verse until slowing down for the chorus and then picking back up again for the next verse. The solo on this track is fucking killer as well and transitions perfectly into the last chorus to close out the song.  This would be the perfect track to open a show up with in my opinion to get the crowd into it early on. Next up is the track “Necrobionics”, which is my personal favorite track from the album. It starts off with that thrash riffing similar to early Slayer before getting back to the classic 90’s death metal that their music oozes from every crevice. One thing that this track made me realize was how much the vocalist Alex has improved on his vocal delivery. While still brutal and nasty sounding, his lyrics are much clearer to hear and his voice overall sounds much more powerful. “Enchancing the Dead” and “Funeral Within” keep the death metal barrage going along at full speed without any chance to catch your breath. These boys do not waste one moment of your time while listening. “Heads Splattered in Seven Ways” starts off kicking you in the teeth straight from the onset with pummeling caveman riffs, pounding drumming and bellowing vocals for two straight minutes. The music slows down a bit to give you a breath until we hear that bass strumming and then we get a gnarly solo full of dive bombing and shredding to the max. The next track has one of the more….unique titles in “Human Chandelier”. The boys take it up to 12 with the speed and brutality on this bad boy with dueling riffs that swirl around while the drummer Matt pounds away like a deranged caveman and Alex barks at you like a savage beast. The little pause at the end seems like the track is over but it launches back with a killer breakdown to change the pace a bit before ending the song going back to faster tempo to finish you off. “Bone Wrought” is the shortest track of the whole album but it is probably the most brutal track. It is full speed ahead with no brakes at all from the get go, even in the chorus. Even the solo is lightning quick, it is there and gone before you know what hit you before going back to main riff for a bit and then slowing it down with a chuggy riff to let you catch yourself. When you think it is safe, they speed it up again and Alex yells BONE WROUGHT at you a few times to close up the track. To close out this absolutely killer album is the track “Trampled Headstones”. Alex and the gents keep this track at mid-tempo until about a minute and a half in where they launch into that chug again to get the listener to nod their head before another solo leaps out from the grave and shreds your face off. The track slogs away, dragging the listener through the muck and slime, drops them into a casket nails it shut and throws dirt in on them while fading out. If you are a fan of this new wave of old school death metal, then do yourself a favor and grab a copy of this album. You will not be let down one bit. Also, if you get a chance, go see them open up for Dying Fetus beginning at the end of April through the beginning of June. They alone are worth the price of admission.