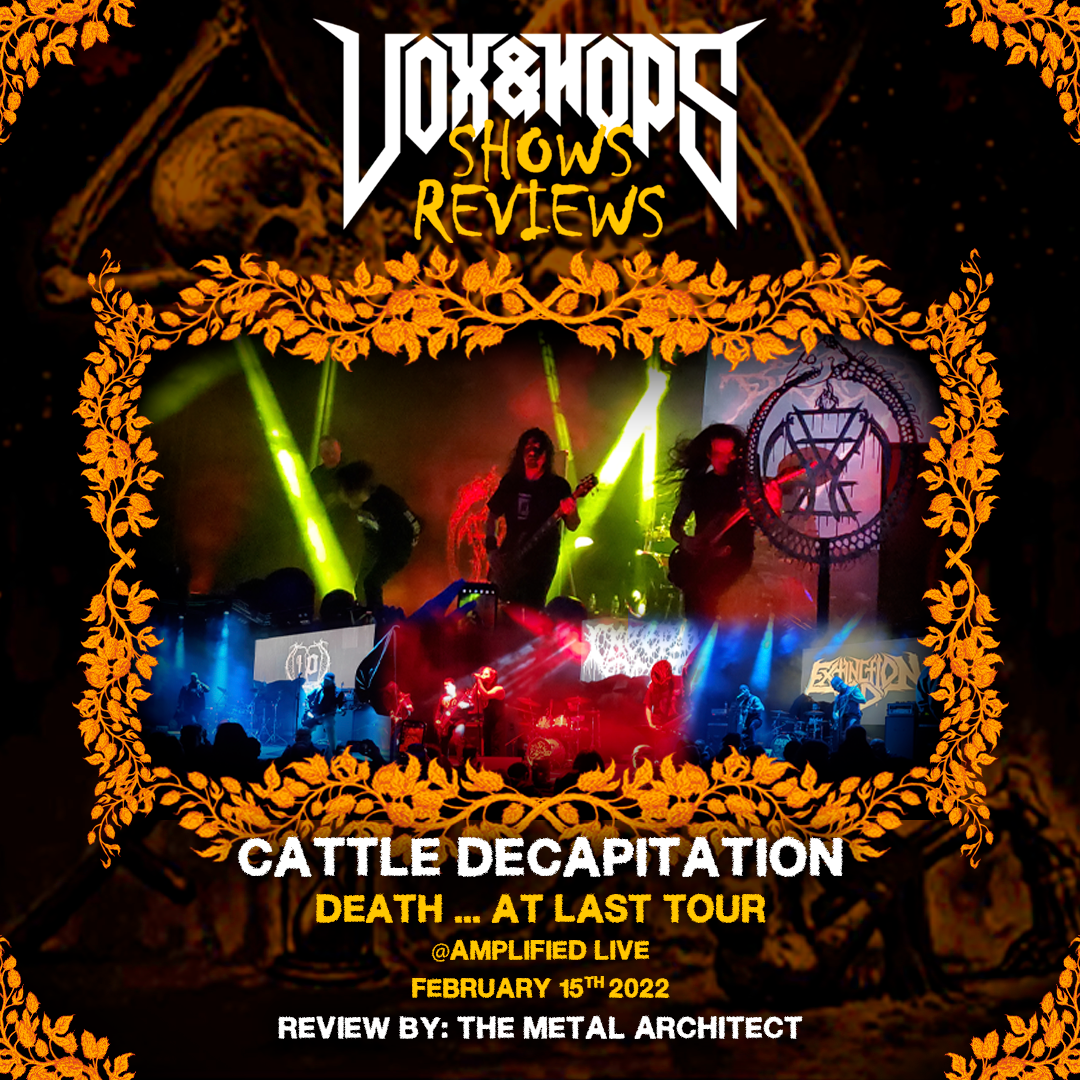 After a two month break from shows, the Metal Architect is back with another show review and this time he went to a show full of hate, angst and rage the day after Valentine’s Day. I am talking about Cattle Decapitation’s Death…At Last tour. They are one band that has always been very high on my list to see but due to life getting in the way, had never got to see until now.

First up was Long Island’s Extinction A.D., who are a thrash/crossover band that formed in 2013. While the crowd was slowly trickling in, they injected the much needed energy to get this crowd whipped up. Opening with a few tracks from their latest EP, CCCP, they had the crowd head banging with their blazing fast riffs and skull crushing drumming. Not satisfied with the crowd, they challenged the crowd to get a circle pit going as they launched into some new material of their upcoming full-length. The crowd responded to the request of the band and small circle pit whipped around the middle of the floor, picking up speed as the band increased theirs. They even challenged one member of the crowd to do pushups in the middle of the pit, which the person did as a much larger group of people joined in the pit and were running around him. Always nice to have a little fun during the set. They closed out the set with Instruments of Death from their first album to cap a very impressive set. They thanked the crowd and the crowd roared back in approval.

Next up was the local heroes in Creeping Death. It has been so nice to see so many young, talented bands get out of the local scene here and onto the national stage. These guys play death metal with a little hardcore flair added in similar to other new bands like Gatecreeper and Fuming Mouth. Wasting no time, they started out with some of their earlier material from their first EP to get the whole crowd moving. Circle pits, hardcore dancing and head banging was on constant display through the whole set as the band continued to pummel the crowd, each feeding of the others energy. The one member who really got into it was the guitarist Trey, who was jumping, windmill kicking and shredding with a lot of energy throughout the set without missing a note. Creeping Death then played some of their newer tracks, amping the crowd up even more. I know a good chunk of the crowd was here to seem them play so they definitely got their money’s worth. I hope I can catch these guys on a headline show in the future. So much fun to watch.

Taking the stage next was Pennsylvania’s The Last Ten Seconds of Life. They are a deathcore band that formed in 2010 and have six full-length albums to date. I had never seen this band live before so I did not way to expect from them but let me tell you, they are pissed off at the world and aren’t afraid to tell you about it. Coming out of the gate swinging with a song called the Sabbath, which is off their latest self-titled album, they crushed the crowd with thick, heavy bass and plenty of downtempo/beatdown style breakdowns. They mixed in old classics from their previous two full-length albums with the new stuff to show how they have progressed their sound of the years. At the end of the set, the vocalist encouraged the crowd to come grab a copy of the new CD if they enjoyed what they heard. It has been a while since I have heard someone say that!

Last but certainly not least was the mighty Cattle Decapitation. I have been a huge fan of these guys for a long time and finally getting to see them live was well worth the wait. The crowd was buzzing in anticipation for them to take the stage. The lights went down and the intro track from 2019’s Death Atlas Anthropogenic: End Transmission began to play as the band took their place on stage. They then unleashed hell upon the crowd with the track The Geocide, which began with one of Travis Ryan’s maniacal high screams. The crowd immediately responded with a circle pit and singing the lyrics back to the stage. The band played with the same amount of energy with Oli and Belisario windmill headbanging throughout the track. After another track of Death Atlas, they brought it back to the older days with the classic Your Disposal then back to Death Atlas for a few more songs before they gave the crowd a real treat with playing the fan favorite Forced Gender Reassignment. The absolute brutality displayed by the band during that song was next level. Totally blown away how great they sounded here. They mixed a few more old ones in with the newer ones. What really impressed me was their endurance while playing the nine-minute-long Death Atlas at the end of set after ripping through ten songs right before that. After Death Atlas concluded, the band exited the stage but the crowd chanted one more song and were rewarded with one of my personal favorite songs in Manufactured Extinct. The crowd gave the band all they had left in the tank with more circle pits, headbanging and even a few crowd surfers to cap off an incredible night of live music! Can’t wait to hit up more shows in the coming weeks and to tell you all about them!
- The Metal Architect
Reviews