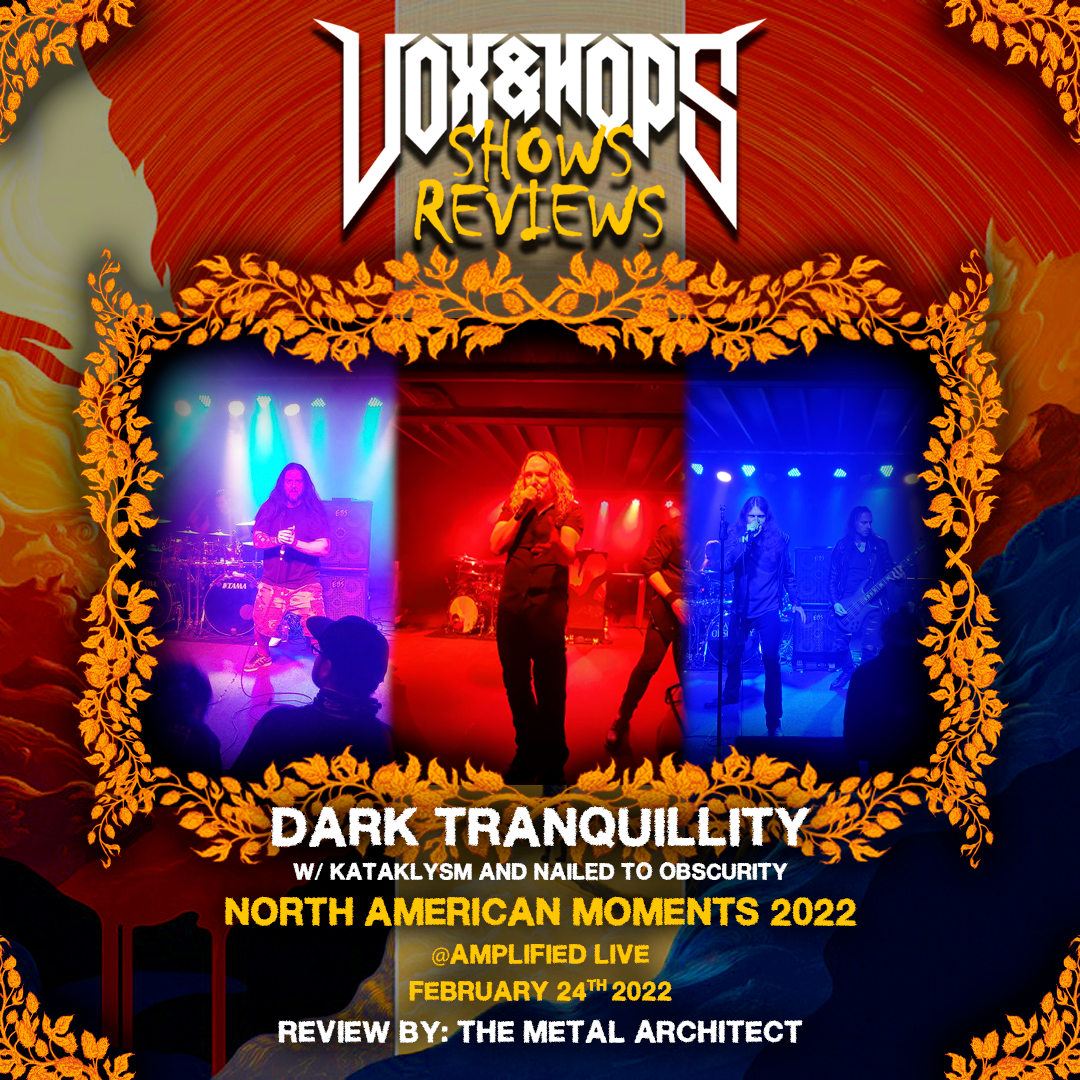 No band has influenced me more than Dark Tranquillity did when I was getting into heavier music. They are a band I can never get tired of and certain tracks still give me goosebumps. So when I saw they were coming to Dallas on their first North American tour since the pandemic, I was totally pumped and couldn’t wait. Mother Nature threw an ice storm at us to try and halt the fun but the bands prevailed and made it in to Dallas just in time to give the fans that made it out a great show.

First up was Germany’s Nailed to Obscurity. For those not familiar with them, they play a mix of melodic doom and melodic death and have been around since 2005. This was their first time to tour in North America and what a tour package to be on! Opening up with the title track to their 2019 album Black Frost, the band got the crowd’s energy up early on. Over their 30 minute set, they played songs off of Black Frost and 2017’s King Delusion to serenade the crowd at times and absolutely crush us at others. They closed with their newest track that they released in January and what a slapper it was! I am not sure if they have a new album in the works but we can sure hope so! An absolutely talented group of musicians. If you are a fan of Insomnium, In Mourning or Decembre Noir, give these guys a listen!

Next up where the Canadian veterans in Kataklysm. These guys have been in the game since 1991 and know how to put on a killer show. They had recently announced they were going to back off touring to focus on other projects but they still gave us 110% during their set. Opening up with “Underneath the Scars” from their latest album Unconquered, the crowd began a circle pit while others headbanged and sang along. The band fed off the crowd’s energy and kicked it up a notch with classics “At the Edge of the World” and “Push the Venom”. The crowd responded with a bigger pit and more yelling and screaming. One of the highlights for me was when they played The “Killshot” which is the opening track from Unconquered. The drummer was spot on with all of his gravity blast beats and cymbal work during that song. It was a treat to watch from up close. Kataklysm treated us with “As I Slither” for their last song which had the whole crowd singing and the biggest circle pit of the set. Before exiting the stage, Maurizio told the crowd that they would be back in the late summer one more time so it seems like one more tour is in store for them. Go see them before they stop touring for a bit!

The final band was the mighty Dark Tranquillity. The Gothenburg veterans led by Mikael Stanne have been doing this since 1991 as well and while their lineup has changed, they are still true to their core sound. When the lights lowered as the band came to stage and the intro to “Phantom Days” began to play, the band roared to life and got even louder when Mikael came on and began to sing. For only arriving at the venue two hours prior to the show starting and setting up the stage in thirty minutes, they sounded amazing. Over the next hour and half, the band treated us with a mix of newer and older tracks without missing a beat. My personal favorite album of theirs is Fiction, so it was a big treat when they played “Focus Shift” and “Terminus”. I was singing along with Mikael and headbanging with everyone around me, just lost in the moment. They threw it even further back with the track “Punish My Heaven”. Mikael spoke about the sudden loss of former band member Fredrik Johansson, who was a big contributor on that song as well as the album it came from, The Gallery. The band played with the song perfectly, with guitarists Chris Amott and Johan Reinholdz shredding all of our faces off with their impeccable playing. The band kept up the mix of new and old with songs like “Atoma”, “Freecard” and “Therein”. The crowd responded positively to these songs with sing alongs, headbanging and throwing the horns up the whole time. As the night came to a close, Mikael told us that they had a few songs left and both were two of my absolute favorites: “Lost to Apathy” and “Misery’s Crown”. The crowd sang harder and louder than they did all night, giving their all as the band reciprocated. As the music ended, the band thanked the crowd, giving out guitar picks and handshakes to the fans who wanted them. After the crowd had dispersed and the band had changed out of their stage clothes, we all shared a few beers and chatted about life, metal and craft beer! It was an outstanding end to great evening! If you still have a chance to catch this tour, please do. You will not be disappointed one bit.
- The Metal Architect
Reviews