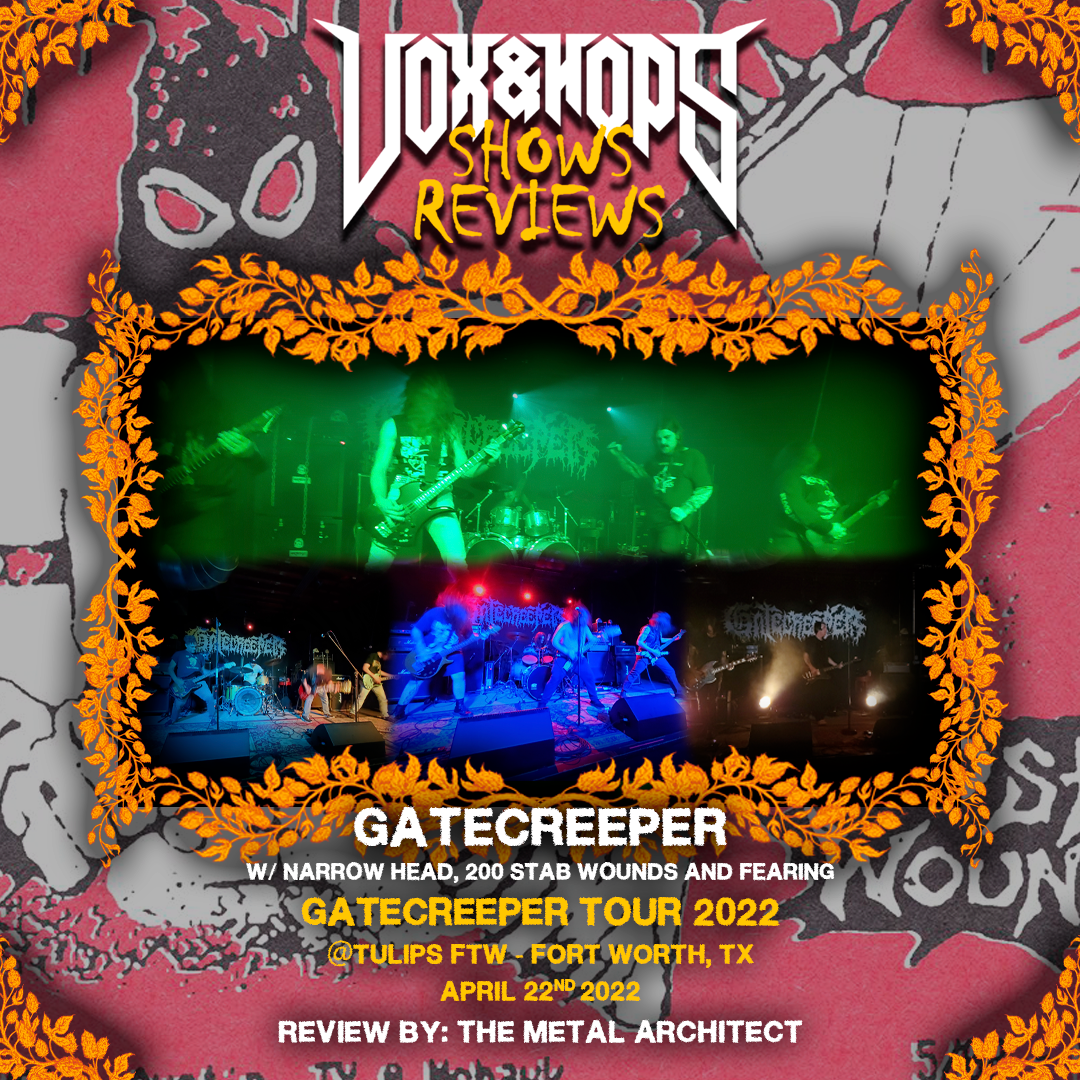 It has been a few months since I was able to get out to a show but last week I was fortunate to get out to two shows in one week. The one I am going to highlight in this review is the excellent tour package put together by Arizona’s Gatecreeper. This band is one I have been wanting to see for quite some time and this is one of the more diverse and eclectic lineups I have probably ever seen. On to the review!

Up first was California’s Fearing. They label themselves as dark post-punk and I would say that is very accurate description. Clad in all black clothing and using little light to illuminate the stage, these guys kicked the show off on a dark and somber side with the track “Pictured Perfect” from their 2020 release Shadow. Heavy on the bass and somber atmosphere, the trio (it appears the drummer wasn’t on tour as they used a backtrack for the drums) cast their spell over the crowd and had us all nodding our heads to music. They also graced us with three songs from their new EP Desolate, that was released the day before this show. Let me tell you, these songs sound really massive live and kept the crowd engaged through their thirty-minute set. For an idea what their music sounds like, think Sisters of Mercy or pretty much any 90’s goth band.

Up next was 200 Stab Wounds from Cleveland, Ohio. This quartet have been on fire since the release of their EP Piles of Festering Decomposition via Maggot Stomp back in 2020. Having recently completed a tour with Obituary, these guys showed no fatigue whatsoever. Starting off their set with “Paths to Carnage” the crowd sprang to life with an immediate pit that did not stop throughout the whole set. These dudes play in your face, no bullshit death metal and they play it well and with absolute precision. They played all but one song off their new album and all three songs from the EP and they sounded absolutely killer. They fed off the energy from the crowd and took very few breaks, keeping the intensity up throughout the whole set. These four guys are going places for sure and I cannot wait to see how far they go. They definitely live up to all the hype you hear about them and if you can catch them on this tour, do it! You will not be disappointed one bit.

Up next was Texas’ own Narrow Head. I was really excited to check these guys out after listening to their latest album called 12th House Rock. Their style is grunge but mixed with some shoegaze and post hardcore. Reminds me of listening to early Deftones mixed with some Smashing Pumpkins, the latter band being massively influential on me as a child when getting into music. These dudes totally blew me away with their set. Full of energy and passion, they ripped through their set without missing a beat. Playing songs mostly from the aforementioned 12th House Rock and first full length album Satisfaction, they had the whole crowd in a frenzy throughout the whole set. Their drummer was on fire the whole time, at one point knocking over one of his cymbals in the middle of the song. It did not faze him one bit. The crowd really responded to the tracks “Hard to Swallow”, “Cool in Motion” and closer “Make it Hurt”. Once the band finished, the crowd went wild with clapping and screaming. An absolutely killer set. They made a lot of new fans that night, including me.

Gatecreeper was up next and the crowd was ready to explode in anticipation. This was my first time seeing them and I was up front and center for it against the barricade. Once the band started playing the opening song “Sweltering Madness”, the pit roared to life and pushed more people towards the barricade, pushing it closer to the stage to get closer to the action. The band pummeled the crowd with a sonic assault of their brand of OSDM. Ripping through tracks like “Puncture Wounds” and “Craving Flesh”, it gave the crowd newer and older material to headbang, mosh and crowd surf to. They also debuted a few tracks from their surprise 2021 EP An Unexpected Reality that were small, explosive and walloped a ferocious punch of brutality. I was hoping for one of their slower, more death doom songs but it did not happen. Maybe on the next tour. Closing with the ever popular “Boiled Over” the crowd gave the band what was left in the tank and went the hardest they had all evening. The band thanked the crowd and exited the stage, closing out a killer night of metal and rock. If this tour rolls through your neck of the woods, I highly encourage you to check it out! I will be back in May with more show reviews for you all!
- The Metal Architect
Reviews