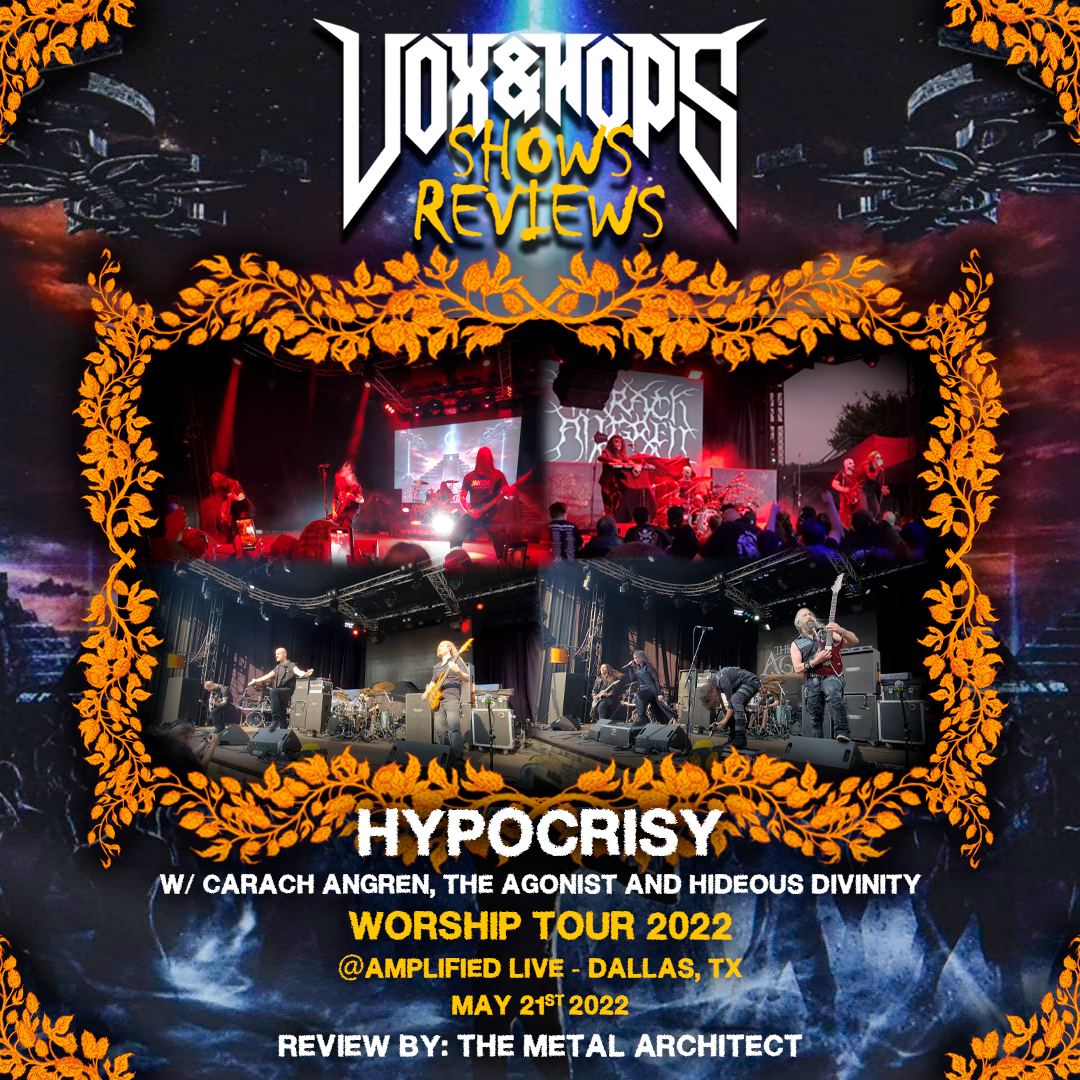 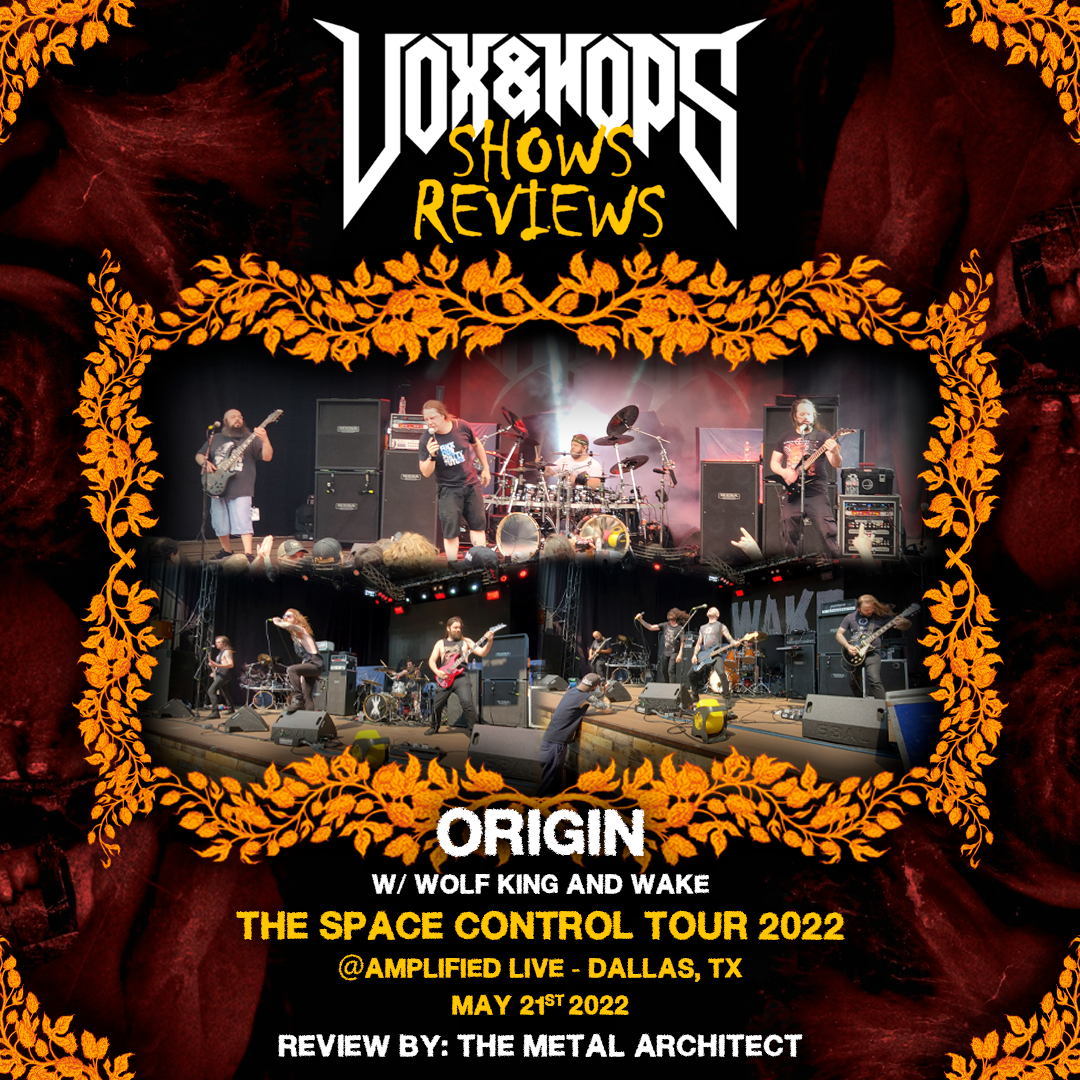 It is not every day you that you get two wonderful tour packages combining and joining forces to absolute devastate a crowd but that is what Dallas got on Saturday May 21. Hypocrisy’s Worship tour, which also featured Carach Angren, The Agonist, and Hideous Divinity, came together with the Origin Space Control tour that had Misery Index (they sadly had to pull out of the last few dates due to personal issues so they weren’t there) Wolf King and Wake.  Both tours were epic in their own regard but when I saw both were playing the same date here in Dallas, I knew there was no way I was going to miss this. This show had it all: scorching Texas heat, heavy tunes, great craft beer and even a person dressed up as a giant wolf.

Opening up this mammoth bill was Calgary, Alberta’s Wake. I have been really digging these guys since I heard their 2020 album Devouring Ruin. Starting off the show with a track from Devouring Ruin, the quintet pummeled the early crowd from the get go. Over their short but action packed set, they treated the crowd to 3 new songs from their upcoming album called Thought from Descent, one being the recently released “Swallow the Light” and let me tell you, this could definitely be a top 10, if not 5 album of the year material. Absolutely punishing material from these guys. The Texas heat was punishing as well, but these Canadian guys handled it well. Vocalist Kyle screamed like a mad man, bassist Ryan assisted with the vocals while laying down the low end of the set, guitarists Rob and Arjun melted everyone with their savage riffing and drummer Josh beat the hell out of his kit. They closed out their set with “Beyond Empyrean” from their surprise 2020 EP Confluence and had the small crowd cheering them loudly as the exited. If you don’t know this band, you definitely need to.

Up next was California’s blackened hardcore titans Wolf King. These dudes have been rising fast in the scene and this was my first time catching them live. Opening up with “Holy Serpent” from 2021’s The Path of Wrath, the band immediately began their sonic assault upon the crowd. Vocalist Tim commanded the crowd to move up closer to the stage and to get engaged, which they all did. Over the next 30 minutes, Wolf King treated us to a large dose of songs from the newest album that had the crowd head banging and cheering wildly. To close out the set, the band dedicated their last song, Greater Power, to the late Riley Gale of Power Trip. A really cool way to end the set in Riley’s hometown!

Hailing from Rome, Italy, Hideous Divinity took the stage and unleashed absolute hell on the crowd that was beginning to fill in a bit. These four Italian gentlemen blew me away with not only their aggressiveness but their precision to their craft. Opening up with “Acheron, Stream of Woe”, the band got the crowd moving more with their style of technical death metal. The assault did not stop except for in between songs but those were short lived breaks for everyone to momentarily catch their breaths. The band treated us to some other new songs like “Chestburst” and “Anamorphia Atto III” but also treated us with an older song by playing the title track to 2014’s Cobra Verde. Vocalist Enrico was feeding off the crowd’s energy throughout the whole set by dashing across stage, fist bumping crowd members along the barricade and showing off his killer vocal chops.

Next up was Montreal’s The Agonist, a band that I have been following for well over ten years now. They must’ve brought the cool air with them because as soon as they took the stage, the wind shifted and got much cooler. The band took the stage to the opening orchestral part to the track “In Vertigo” before launching into the song that not only had the crowd head banging, but all the band members as vocalist Vicky took her place on stage. She belted out her screams with perfection and serenaded the crowd with her cleans during that epic opener. They kept the train rolling with more songs off of their latest two releases, 2019’s Orphans and 2021’s Days Before the World Wept. Not even some technical issues with the drummer’s pedals could stop them. They just swapped them out and kept going. Nothing was going to stop this band from putting on a show for us. Danny and Pascal shredded through all the songs with great effort as Pavlo laid down the low end for them on bass. Closing out with the title track from Days, the band gave it their all as the crowd cheered them on until the music stopped. Even in true Southern hospitality, a gentleman brought Vicky a beer that she had asked for during the technical issue break at the end of the set.

Up next were the tech death titans Origin. These dudes were most likely the loudest band of the whole night. The bass from John’s drum kit and from Mike Flores bass absolutely hit you square in the chest but in a good way. The crowd was super active throughout the whole set. I even saw the vocalist of Wolf King throwing down in the pit with the crowd. Love to see bands getting down to other bands in the crowd. The boys played songs spanning their catalog like “Saligia” from 2011’s Entity. They also treated us to new music from their upcoming album with the title track “Chaosmos”. It is an absolute ripper! Really stoked to hear the rest of the album. Vocalist Jason commanded the crowd through the set, encouraging them to pit harder, band their heads and even got a good size wall of death to happen before launching into a song.

After a quick dinner of wings and beer for me after Origin, the Dutch duo of Carach Angren was up next. This symphonic black metal band has been terrorizing live crowds for a good long while but this was my first time seeing them. Opening up with an old one in “The Sighting is a Portent of Doom” from 2010’s Death Came Through a Phantom Ship, the band commanded the whole crowd, as if they had cast a spell on them. Multiple pits ensued throughout the set and the night’s first crowd surfers emerged. I even saw a few people saying wow, these guys are intense. They definitely impressed the hell out of me with their show. They even went deeper into their catalog with “The Carriage Wheel Murder” and “A Strange Presence Near the Woods”. They also played newer tracks of their 2020 release Franckensteina Strataemontanus. Everything about this band was impressive, from their musical talent down to the detail on their corpse paint. I’ll definitely be checking out more of their older stuff now.

To close out this epic evening of metal was the Swedish death metal kings in Hypocrisy. I am massive fan of Peter Tagtgren and all of his projects so this was a bucketlist band for me to see. The lights went down as the instrumental opening began to play. The band took their places on stage and exploded into the title track of their latest album, Worship. A pit broke out instantly as the band sonically pummeled the audience with their brand of Swedish death metal. The crowd and band fed of each other’s energy as Hypocrisy ripped through a set that was surprisingly compromised of older tracks, with only three coming from the newest album. Some of those deep cuts included “War-Path”, “Fire in the Sky” and “Weed Out the Weak”.  The atmosphere was absolutely electric. You could tell that both band and fans were glad to be out here doing this again after a few years off. The band took a quick breather before finishing off their set with some more older tracks before ending with the crowd favorite “Roswell 47”. A perfect way to cap off a hell of a day of great live music!
- The Metal Architect
Reviews 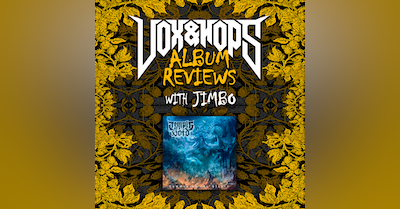 The album is immediately recognisable as Temple of Void, with their crushing wall of guitars, rumbling bass and Mike Erdody’s cavernous death growl… 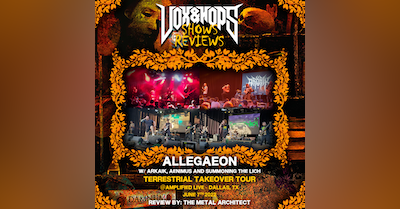 On a very hot June evening, I went to check out the Terrestrial Takeover Tour featuring Allegaeon, Arkaik, Aenimus and Summoning the Lich at Amplified Li…