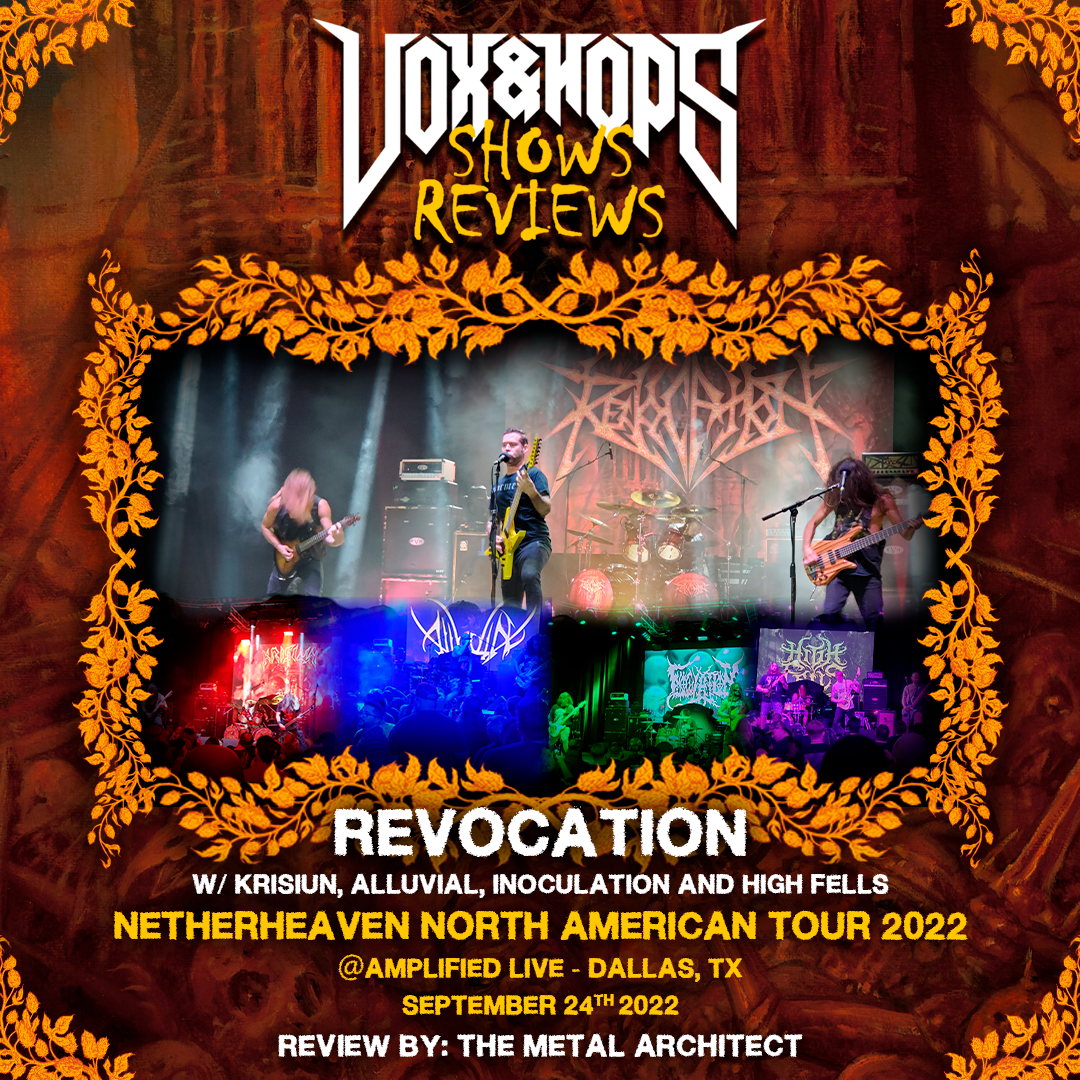 Alright, it has been a hot minute since I have done one of these show reviews so I figured I would knock one out for a tour that is currently kicking ass across North America right now. That’s right, we are talking about the Netherheaven tour featuring Revocation, Krisiun, Alluvial and Inoculation. I headed over to Amplified Live in Dallas on a rather warm Saturday evening and these bands cranked the heat up even higher!

First up was local Denton, TX act High Fells. These guys have been around since 2020 and I have seen their name pop up a lot recently due to them being on a good number of local shows as well as being opening acts for national tours. These dudes play some killer blackened death that got the crowd into right from the first note. They don’t have a lot of music out currently but they did play a few new songs from an upcoming album they are working on, including the recently released single called “A Summon”. Even for a newer band, these guys were tight and on point.

Next up was Cleveland’s Inoculation. This was my second time seeing this Ohio trio and they brought it just as hard as they did the first time. Playing a killer style of death metal about aliens, the boys started off with the title track off their 2021 album Celestial Putridity. The crowd responded with an immediate pit and head banging. The band played a few more songs from the newest album before treating the crowd with a few newer, unreleased tracks that went over well with the crowd. I can’t wait to hear the new album with the way these tracks sounded live. After the second newbie, we were treated to one of my favorite tracks in Xerthaneus. It had me head banging along with music and cheering the band on while the pit whipped up one more time. If you can catch these dudes on this tour or any other tour, please do it. Such a killer band!

Next up was Alluvial and man what a treat that was. I had never seen this band before but was pretty familiar with their body of work. Fronted by Kevin Muller, who did live vocals for a few years in Suffocation, this four piece came right of the gate with “Anodyne” from their most recent release named Sarcoma. I was blown away with how great they sounded. Vocals were on point and punishing while all the instruments were mixed into the live sound perfectly, nothing drowning out the other. As the pit crept back to life, Kevin encourage them to bring it hard for them and they would return the favor. This continued for the whole set which included other Sarcoma songs such as “Exponent”, “Sleepers Become Giants” and “Ulysses”. Watching Wes Hauch shred these songs on guitar was absolutely amazing. An absolutely amazing guitarist. I left that night a much bigger fan of their music.

Next up was the Brazilian trio, the mighty Krisiun. My first introduction to these dudes was way back in 2016 when they were on the Summer Slaughter tour. I fell in love with just how damn brutal they were. I always describe their music as no bullshit death metal. They come in, beat you into a pulp with their music and leave you laying there on the floor. They too had just released a new album called Mortem Solis back in July so I was super pumped to hear the new stuff live. Instead of playing the new stuff right away, they came out and kicked the crowd in the face with “Kings of Killing” from their 1998 album entitled Apocalyptic Revelation. The pit exploded into a frenzied pace as the band pushed them on with their blazing riffs and frenetic drumming as vocalist Alex bellowed at the mic. The old school jams continued with “Ravager” before we got a taste of the new stuff with “Swords into Flesh”, which was massive live. These three dudes are just so much fun to see. They are so thankful for the crowds that they draw and feed off the energy of the crowd. After hearing another new track from the new album, the band went back in time for some older tunes again, much to the joy of everyone in the crowd. They definitely got everyone hyped and ready for the headliner.

Boston’s Revocation was up next and let me tell you: I have seen this band a few times and they have gotten better each time I have seen them. Dave and the boys brought their A game right out of the gate with “Nihilistic Violence” and “Diabolical Majesty” from the new album Netherheaven, crushing the crowd in their wake. These tracks were heavy, fast and played flawlessly. The pit was going wild, horns were up in the air and pretty much every head was moving during their set. After the first two, they played a few crushing songs from the Outer Ones before coming back with more from Netherheaven without missing a beat. They then went back some years and played “Madness Opus” from Deathless and “Dismantle the Dictator” from Existence is Futile which pleased this old fan and much of the crowd. To close out the set, they revisited the Outer Ones again to destroy what was left of us. The pit grew bigger and bigger with each song, consuming most of the floor while the band ripped away on the stage. Once the set was over, the band threw out a few souvenir picks and thanked the crowd one last time for coming out on a warm Saturday evening to party with them. If this tour hasn’t come to your city yet, please go see it and support all these amazing bands. Until next time, cheers!
- The Metal Architect
Reviews 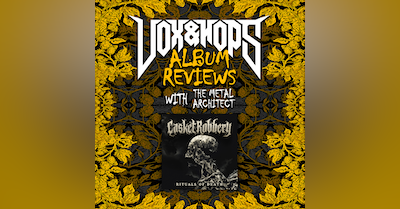